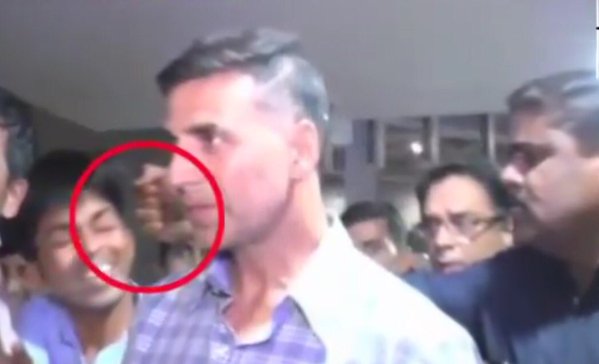 Not all encounters between fans and stars end well.

Case in point, a recent incident that took place at Mumbai Airport when a fan was trying to click a selfie with Akshay Kumar.

While Kumar was heading towards the airport gate, a fan came from behind to take a selfie with the ‘Airlift’ actor. But, before he could even level with the star, the actor’s bodyguard punched him right in the head.

Although the bodyguard’s response might have been a reflex to protect the star, was punching the guy with his bare knuckles really required?

Kumar, who didn’t see the punch, looked back after he realised something was wrong. Unfortunately, by the time he looked, all he saw was a scandalised fan. He had no idea that the fan was in a state of shock for a completely different reason.

Since the video has surfaced now, we assume it was taken recently. But we are still in the process of investigating when exactly the incident took place.

We will update the report as soon as we find out more about when it transpired and whether Akshay learnt about his bodyguard’s error in judgement and did something to make up for it.