On Sunday, Hyderabadi cricketing fans were in for a treat when the David Warner led Sunrisers Hyderabad defeated Kohli’s Royal Challengers Bangalore to win their maiden IPL title.

Critics and fans lauded the Australian batsman who steered the team to victory with his exceptional performance. Warner was also praised for his captaincy in the high stakes game, as he kept his calm at a time when all hope was lost.

As expected, Warner’s friends, teammates and well wishers congratulated him on social media.

Belter of a final –

Congrats @SunRisers & @davidwarner31. We fought hard but it just want

meant to be tonight. #RCBvSRH #VIVOIPL

You are one man army Mr

@davidwarner31 and you do deserve to win #IPL2016. Congratulations, salute n

best of luck for future.

@davidwarner31 made them face the phobia of RCB

The list of well wishers also included Pakistani batsman Umar Akmal, who took to twitter to congratulate Warner. Unfortunately though, he made a major goof up and ended up getting trolled for his tweet to the Australian. Instead of mentioning IPL (Indian Premier League), Akmal mistakenly mentioned PSL (Pakistan Super League) and incurred the wrath of Twitterati.

This will probably tell you how things went from there: 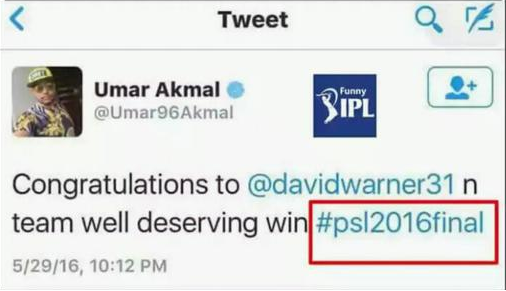 Although Akmal rectified his mistake by deleting his previous tweet and sharing a new one, the Twitter trolls just kept on coming.

it’s IPL final which is bigger and better than Psl